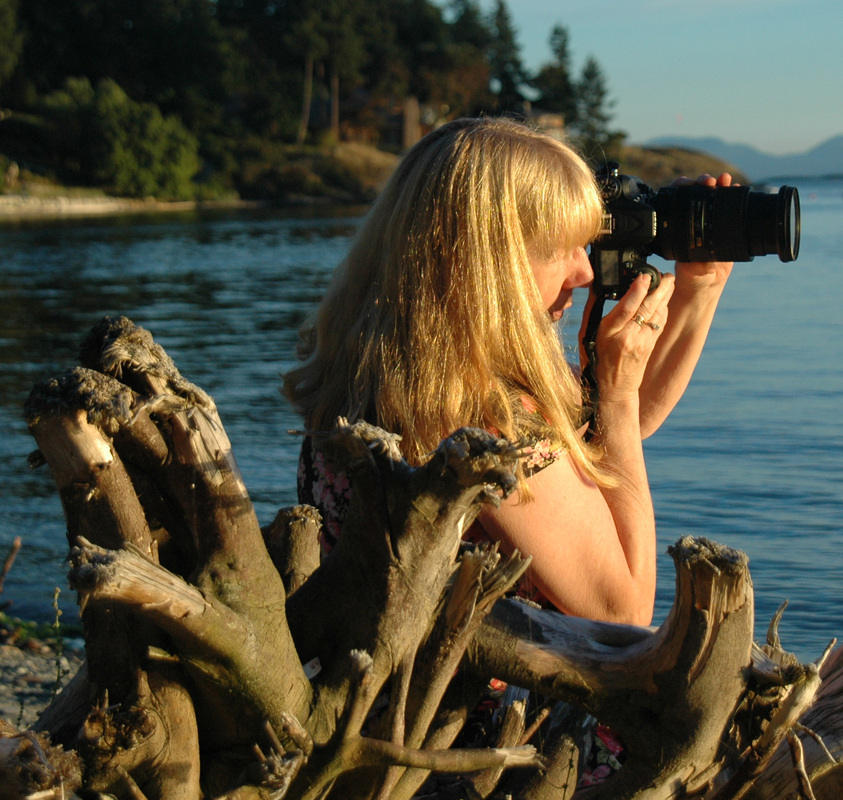 
Elaine Hunter is a self taught contemporary photographer who was  born in the UK and moved to Canada where has lived most of her adult life.

She danced from the age of 3 years old studying ballet, jazz and tap. She was happiest when she was dancing or out in nature enjoying its peacefulness and power.  Later she became a school teacher but her heart was always wanting to dance.  Movement was and is an important part of her artistic life. Elaine opened her own dance school in Ottawa Canada which she directed for 31 years. As a result of  this experience of dance in her life  she now creates images of nature dancing, She says, "Movement is a major part of my photographic images, where I used to choreograph my students, now, I Choreograph Nature. "

Elaine's  experience consists of over 15 years of perfecting her skill and technique in the art of image-making through photographic manipulation. Her images are exciting and captivating. With the advancement of digital photography she has discovered the perfect medium to create dramatic one-of-a-kind images.  She says, " I love the journey from the camera lens to the computer where I create the finished pieces of art."

Elaine's work is a photographic experiment in search of the illusive world around us. In her latest exhibition, My Chimerical World, Elaine  wants to take you to a wildly fanciful terrestrial paradise. Whether it is one plant, an ocean or a mountain range, it is her intention to make you wonder if the visions that she created were actually there when the photograph was taken. She works with the idea of there being many dimensions and  her imagination  creates some of them for us to see.

Elaine won Best in Show from Colors of Humanity Art Gallery and  several  awards of excellence in Ed Wedmans Exhibition Without Walls, juried on line competitions. Several of her images are in the Admiral Lounges in JFK and Miami airports and she has her Pine Tree images decorating many rooms in the newly renovated Fairmont Royal York Hotel in Toronto. Her photography was also selected as part of the Celebrate BC Day in 2013. She has exhibited in galleries in Vancouver and the Sunshine Coast in B C Canada as well as New York, California and Europe. Elaine had a wonderful article written by Renee Phillips of Manhattan Arts International, "Elaine Hunter Creates Visionary Photographic Art", July 2014. Elaine was chosen a a finalist  in The Healing Power of Art Exhibition, Manhattan Arts, April 2015 and was 3rd  in Exhibition Without Walls' The Four Elements 2015. Elaine was chosen as a featured artist with Artsy Shark in June 2015.  Elaine was selected as one of the TOP 40 in the 2015 LACDA 2015 Top 40 Exhibition and is now represented by LACDA. ​( Los Angeles Center for Digital Art). Elaine won BEST IN SHOW with CAGO Weather Exhibition, November 2015, was selected as a finalist in the New Beginnings Exhibition of Manhattan Arts International, December 2015 and was a finalist in the Gala Awards , Julia Margaret Cameron, Fine Arts Category, December 2014 and 2015 and 2016, she will be exhibiting in the 5th BIENNIAL OF FINE ART AND DOCUMENTARY PHOTOGRAPHY, Barcelona  Oct. 2018.  In November 2016 Elaine won another Best in show from CAGO for her "Storm Over Toronto" Image.
Elaine was a finalist in the 10th Pollux Awards August 2017, with her series Reflections and also in Photographers Forum magazine August 2017 with her image Orange Blossom.  Elaine  exhibited her series Reflections in Vancouver April 2018. She won the James Bacchi Arthaus Gallery Award as part of the New Beginnings Exhibition with Manhattan Arts International, January 2018. Elaine exhibitied in  Peformance Works , Granville Island March - May  2018, this  exhibit was her Reflections Series. Elaine had 4 images in The World Through My Eyes Exhibition in Barcelona April 2018. Golden Hour Series chosen as finalist in The Julia Margaret Cameron Awards fine art category, June 2018. Elaine was one of 6 artists chosen for the Sechelt Arts Festival 2018. She was part of the 5th Biennial of Fine Art and Documentary Photography in Barcelona 2018. Elaine won an honourable mention ( 4th place) for her Sechelt Tree series in the nature category of the 2018 Pollux Awards as well as 4 finalist awards. She was one of the 8 artists chosen for the Earth Art Exhibition as part of the Sechelt Art Festival October 2018. She was the winner in the Pollux Awards nature category series with her photographs called Saskatchewan Trees. November 2018, these will be exhibited in Barcelona 2019. She exhibited in Port Moody Arts Centre, Sept. 2018 Art 4 Life.   Her work Reflections was exhibited in Gibsons Public Art Gallery in  June 2019, this is a series of 10 images.  She had several  pieces exhibited in Sechelt Hospital in October 2019. Elaine will be exhibiting in Barcelona again March 2020 with her series Arbutus which was selected as 3rd place in the open category.

Elaine has goals for her photographic images, and stated "My goal is to uplift, inspire and support you on your journey through life. I wish to excite you as you gaze upon the images of Nature that I create. I feel that I am revealing the soul of Nature, and hope that you too, experience the love that I have in my heart for the world around me."

She now lives in BC, Canada where she produces her work in her home studio in Halfmoon Bay.

© 2018 Elaine Hunter Photography- All Rights Reserved. Any use or alteration of these images (including but not limited to cropping or removal of any mark) without the express written permission of the photographer is strictly prohibited. This applies to all the photographs taken by Elaine Hunter posted on any website.

Fine Art Photography. Photographic prints  for sale.  Elaine Hunter specializes in Nature Photography and uses her computer to create one of a kind images. Her images are exciting and captivating. Describing her work as Chimerical, she manipulates her original photographs until the final art is created,. Elaine Hunter's catch phrase is " Nature Choreographed by Elaine Hunter".  The photographs can be printed onto Art Posters, canvas, metal, wood, photographic paper, and many other materials. Fabrics can also be made with the  photographic designs of Elaine Hunter. Elaine has been working in the photographic art feild for 12 years and continues to develop new skills so that she can amaze her clients with her exciting new photographs.   Elaine uses a Nikon D7100 but would love to own a Nikon D810. Adobe Photoshop 2017 , lightroom, adobe illustrator, topaz labs and  On one are a few of the softwares and plug ins available for photograhers who want to take their images to another level. Interior designers purchase Elaine's work to stage homes, her images are also available for rental.  Elaine is always out in nature taking photographs of mountains, the ocean, trees, forests, flowers, fields, gardens, landscapes and seascapes, clouds, sunsets, sunrises and she especially loves stormy skies.  She loves her 18 - 300mm  nikon lens and also her fisheye lens.
Elaine Hunter has exhibited in Vancouver, New York, L A, Europe and on the Sunshine Coast Canada.  Her exhibitions are always captivating as she is always learning new ways to create exciting photographs with the help of her computer.  She has won Best in Show 3 times online and many awards of excellence. Some of Elaine's work with black and white photography was exhibited in a special black and white photography exhibition in  B C Canada.
She works with her original photographs and manipulates them using adobe photoshop and many plug ins. Her Fine Art Photography is Inernationally known.  Photography is he passion and Elaine works every day learning new techniques to create the Fine Art Photography shown on this website.
Elaine Hunter is an internationally known nature photographer. Her photographs of nature find the hidden mysteries.  Fine Art Photography has also been used to describe Elaine Hunter's work.
British Columbia photographer Elaine Hunter can be found on forest trails, beaches, mountains and fields with her nikon d 7100 camera always ready to capture nature's beauty. List of Services:

© Elaine Hunter Photography -2015- All Rights Reserved. Any use or alteration of these images (including but not limited to cropping or removal of any mark) without the express written permission of the photographer is strictly prohibited. This applies to all the photographs taken by Elaine Hunter posted on any website.